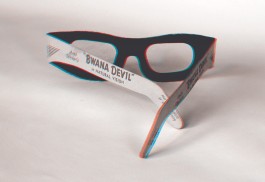 NATURAL VISION is an anaglyph 3D print at cinema quad poster scale, presented with anaglyph spectacles, originally created for the exhibition - Strelnikov’s Glasses and Other Stories at HOME, Manchester, UK. The exhbition was curated by Society of the Spectacles – a creative research group that explores and celebrates the cultural significance of eyewear in art and film. The show featured 24 artists from various practices including graphic design, film-making, illustration, fine art and photography.

NATURAL VISION  refers to the 3D cinema system developed for the first ever colour 3D film – Bwana Devil. The film (or more precisely, it’s audience) is also famously depicted on the cover of Guy Debord’s 'Society of the Spectacle' – a text which was referenced by more than one work in the show. TMy work also critiques the practice of arts organisations and cinemas in producing new kinds of 'spectacle' in order to attract ausiences - a practices that distorts the orginal aims and functions of the instituation, and often acts as a barrier to the work itself.

"The spectacle reunites the separate, but reunites it as separate."

Guy Debord - The Society of the Spectacle

Society of the Spectacles