The ‘girt shyning weals’ of Russell Hoban’s post-apocalyptic novel Riddley Walker, suggest a technologically advanced society, long since passed. Set in the far future, the novel raises questions about how the past is (mis)interpreted from fragments left behind. What will people find two-thousand years on from the summer of 2017? Perhaps, they’ll be digging up fidget spinners. Will they assume these popular toys to be some form of advanced technology? For what purpose?

The eponymous hero of Hoban’s novel is the agent of change, taking over the role of seer / shaman after his father is killed unearthing strange rusted iron machines. Riddley begins to interpret events for his people, sensing a great shift in events, and diverging from the official narratives of the quasi church/state governors. His encounter with the girt shining weals is the catalyst for his own revelations and the ‘1big1’. Change is indeed on the horizon with the arrival of the ‘yeller boy stoan' (sulfur) and the discovery of how to make gun powder. History will repeat itself, with catastrophic results.

This giant 48kg cast-iron fidget spinner was cast by Stuart Filby of SG Castings in Nelson, Lancashire, based on a 3D foam mould that was CNC milled at Altrincham FAB lab. It was then installed for the TIME BACK WAY BACK exhibition in Barrow, buried in a foot of concrete. The intention was for vistors to dig it out using hammers and small pick axes, however, the mixture proved to be too tough, and the weal remained concealed for the duration of the show for which it was created. It was finally dug out after the show with the aid of some sledge hammers, where upon it was revealed to have rusted considerably, and subsequently reinstalled at the International Anthony Burgess Foundation.

"Rusted is Living, Polished is Dead"

"How cud any 1 not want to see them shyning weals turning? A weal wot ternt an spun and every kinder had un - a figget. Legend spoak of a girt shyning weal, the 1big1. Gynt it was. Some bloak from Nelson cast it in a gyrt fyre. Now it kept safe, burrit deep in a circel of concreet, deep in the hart of it." 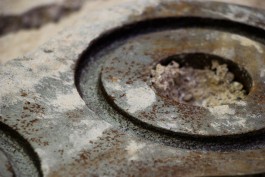 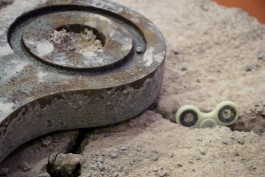 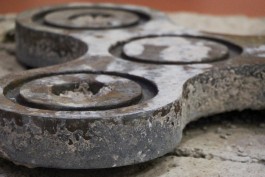 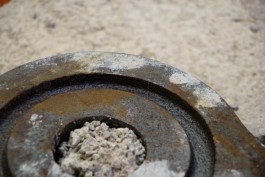