FIRST DIBS! is a pop-up roller banner featuring text from an early version of the website for the Crusader Mill - a property development owned by Capital & Centric. The banner proudly reclaims the original text of the site, faithfully  reconstructing the branding in hot pink and white colours and Future Bold text.

This work is part of an ongoing series highlighting C&Cs construction of the regeneration narrative - in this case, the erasure of initial strategies to attract investors. In July 2017, weeks C&C launched a national PR campaign declaring their intention to 'ban investors' from buying flats at the Crusader Mill development, instead focusing on 'locals only'. 2 weeks later, they received a £25.5 million loan from the Greater Manchester Housing Fund -  a public fund initial setup to encourage the development of affordable homes. However, this focus on 'owner occupiers' was not their original strategy, as early versions of the Crusader website did infact invite investors to buy multiple flats. When I asked them about this change in approach, they denied that they had ever advertised or sought investors. Unfortunately, the website no longer had any mention of investors - infact it had changed just weeks before the PR campaign, and their subsquent funding award. But thanks to the Way Back Machine - an archive of the internet - the earlier text touting for investors can still be viewed (albeit without some of the original hot pink branding). Perhaps even more shocking than the blatant canvassing for investors is the cringeworthy attempt at humour, as the web-form asks potential investors if they "like chocolate?".

FIRST DIBS! re-presents this important web-based legacy as a real-world promotional tool, in the hope that the Capital & Centric will at last reclaim (or at least  own) their original narrative. I have however ommitted any reference to the original 'chocolate' joke - I'm not a monster after all. 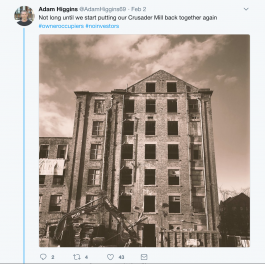 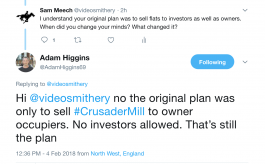