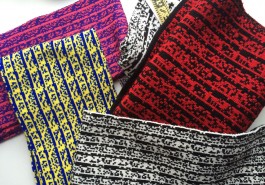 Alan Turing: “Machines take me by surprise with great frequency”
available in: black / white   *SOLD OUT*

All scarves are double jaquard (reverse design on the other side). They have been knitted on a 7-gauge machine and measure approx  72″ x 10″. They have a selvage on each side, and finished using the overlocker on each end.

BINARY SCARVES are a series of knitwear informed by the ASCII text system of encoding text to binary. Each design contains a quote related to either computers, binary, patterns, digital art or repetition. The designs are presented within the constraints of a standard 24-stitch punchcard pattern repeat. The scarves have been produced in collaboration with a factory in Manchester, ironically named Unique Knitwear.

The project began as a commission to create a data visualisation scarf telling the story of 25 years of the World Wide Web. It was presented to Sir Tim Berners-Lee (inventor of the World Wide Web) at the 2014 Open Data Summit. The www.scarf encoded a quote from his original 1989 CERN memo:

“The system must allow any sort of information to be entered. Another person must be able to find the information, sometimes without knowing what he is looking for”

This design process has since been explored further in collaboration with Unique Knitwear, Mcr (We worked on the Unique Editions exhibition together), producing a series of designs and colourways encrypt quotions about computation, pattern and digital aesthetics.

The design of each scarf encrypts a quotation as a binary code, whereby each 8 stitches represents a letter from the alphabet, using a value ascribed to a character from the ASCII text alphabet. (You can find lots of text to binary convertors online).

(Machines take me by surprise with great frequency - Alan Turing)

At first the connection between Turing and knitting might not be apparent, but the development of textiles technology and computers go hand in hand. Jacquard looms were programmed using punchcards – a system that formed the interface for early computers. The notion of encoding information, patterns and functions on the punchcard applies to both technologies. Amazing fact: Brother, who made the domestic knitting machines that I use in workshops, and many other textiles machines for industry, are better known for producing computers and printers, and based their headquarters in Manchester in 1968. The parallels between textiles and computing are historic but also embedded in the design process itself - what is knitting but a digital system, only using stitches instead of 0s and 1s?

I enjoy using domestic knitting machines to give people a chance to get knitting but also learn about digital design. The machines themselves often attract the attention and curiosity of all ages. People either encounter them for the first time, or they have fond memories of a mother or grandmother knitting away on one. I found myself having many conversations with people about the mechanics, but also the opportunities for design that they offer. Each person brings their own skills and interests – from suggesting it could be a way of expressing data to archiving personal stories, or even writing music (echoing the way Ada Lovelace envisioned the potential of Babbage’s Analytical Engine’). The power of knitting is that it is disarmingly familiar, and so people feel qualified to make their own digital designs and encrypted knits. The added bonus of course is that you can wear your digital art.

ASCII is an encoding system, known as an abbreviation for the American Standard Code for Information Interchange. Designed initially for old type computers and printers from telegraphic codes, it was based on 128 symbols including 10 numbers, 26 letters of English alphabet, a number of punctuation marks, etc. – from BinaryHexConvertor.com 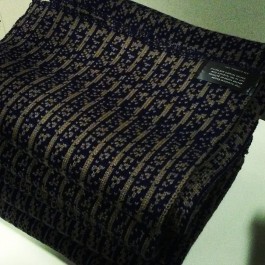 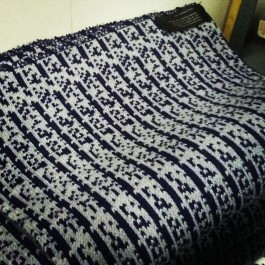 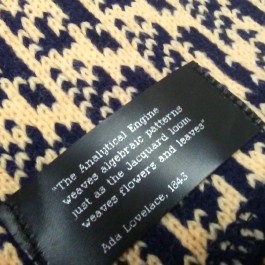 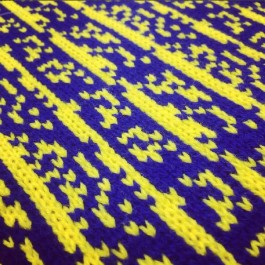 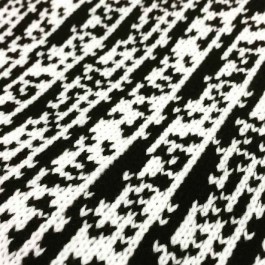