ART WASH / LUBRI KUNST appropriates the branding of developers Capital & Centric's CRUSADER development to make explicit (in the bluntest possible way) their aims in 'supporting' artist activities in relation to property. At the 2016 Rogue Open Studios, the developers (now sponsorors of the event) placed several large OSB boards around Crusader Mill, emblazoned with the phrase 'CRUSADER BY CAPITAL & CENTRIC'. Typeset in Futura bold and cut from hot pink vinyl, the signs demonstrated the developers' exploitation of the artistic community tin the branding their own project. Their sponsirship of the event aimed to show C&C as engaged with and in support of the studios, rather than in conflict with them, thereby deflecting criticism and dissent, and distracting from other potentially negative issues about the development, such as the lack of of affordable housing and the displacement of the long-standing south asian textile community.

The term 'artwash' is increasingly common in discussions around gentrification and social cleansing. The notion that artists may be exploited for or even complicit in (knowingly or unknowingly) the service of regeneration is extremely troubling. But it is a reality of the landscape that artists must navigate in order to survive and make work. Art and artists can be used to distract from criticism of a development agenda, to raise the profile of a developer, or provide a 'soft' approach to engaging an existing community who will be affected. Ultimately, art makes regeneration go smoother. In 2008, as part of artist collective Re-Docc, we recognised this dynamic at play, and coined the term 'lubrikunst' to hint at how art can be used to effectively "oil the gears of  capitalism". .

Developers such as Capital & Centric and Urban Splash indeed proclaim that they know the value of artists in artwashing their activities and spear-heading development. C&C have since gone on to host several live art events at their newly acuired properties, from the 'Grand Exposition' at Talbot Mill, to the Art Battle Manchester at Crusader. They have even begun to co-opt street art, through their 'Mancuanian Spray' events, ostensibly in support of homeless charities, but with the added bonus that sees many artists make work (for free) that effectively rebrands the surrounding neighbourhood.

In truth, the panels I have made add little to existing discussions around artwashing, but simply act as markers to point to its occurence here in Manchester. Moreover, they point to who is doing the art-washing by adopting their branding. It's worth noting that the original panels stating 'CRUSADER BY CAPITAL & CENTRIC', were left in the rain forover a year. As the vinyl began to peel off, it revealed a new message - 'CRUSADE BY CAPITAL'. I think there is some truth to this idea - a form of cultural imperialism is at play that displaces (and replaces) communities through regeneration of buildings. Art and graphic language are key to this - they act as a cultural sheath for the economic blade. I find C&C's CRUSADER branding facinating in its cynical appropriation of 'hip' aesthetics through text, materials and colour. The use of OSB board has become a fixture of 'hipster' cafes within Northern Quarter and beyond, and is in itself a symbol of gentrification, possessing a cheap aesethetic that can be used to signify ideas of community, DIY and personal enterprise. It is no longer used for it's functional value or economy, but for it's aesthetic value - its ability to suggest the idea of those things (along with DIY community, etc). The hot pink vinyl screams "we are different" (though it is now something of a cliché), and Futura bold is a great font - reliably hip. Capital & Centric know their audience - young urban professionals, hipsters - and they know how to appropriate their language. 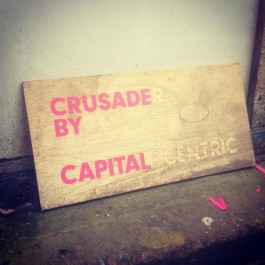 It seems some of the letters on this smaller sign peeled off in the rain.